15 BILLION yes, that’s all it took Walmart Inc to take over majority stake in India’s leading online retail selling company, Flipkart. Flipkart leads India’s online selling and retail market with over 40 % market share with an aim to go up to 50 % by 2020. For all the newbies out there, the all famous Walmart inc is an American retail multinational corporation that operates a chain of hypermarkets , retail stores, grocery stores and discount departmental stores. Walmart has over 11,718 stores and clubs in 28 +countries world-wide under different names. It was also the world’s largest company by revenue approx $480 billion according to the Fortune global 500 list in 2016. It is a family owned business(Walton family)which is publicly traded.

On the other hand Flipkart co-founded by Sachin Bhansal and Binny Bhansal, is an Indian electronic company headquartered in Bangalore, India. With revenues of over 200 billion rupees in 2017,  with an employee base of over 30000 employees, it owns many subsidiaries under it like Myntra, jabong.com, phone pe (its online payment partner), and many others.

Details about the deal:-

1)American retail giant Walmart wrapped up the acquisition of Flipkart in the world’s largest ever e-commerce deal so far. Walmart paid $15 billion for around 75% stake in Bengaluru-based Flipkart and negotiations have entered the final week.

2)Flipkart founder Sachin Bhansal will now exit completely. He has sold his entire 5.5% stake to Walmart. Sachin, along with co-founder Binny Bansal, once worked as interns at Amazon. They started Flipkart in 2007 in an apartment in Bangalore’s Koramangala.

3)Walmart had been trying to enter India for years. Strict FDI rules has so far kept its presence limited to just the cash-and-carry segment. It currently has 21 stores in India and is thus fulfilling its dream of retail presence in India.

4)Naspers, one of the largest investors in the Indian Internet  market, has sold its 11.8% stake in Flipkart to Walmart for $2.2 billion, representing an IRR of 32%.

5)U.S.-based e-commerce firm eBay on Wednesday said that it had notified Flipkart and Walmart that it intended to sell its holdings in Flipkart, which will represent gross proceeds of approximately $1.1 billion

6)Softbank, the largest investor in Flipkart, will cash out its stake of over 20 per cent for close to $4 billion, said another person with a direct knowledge of the deal. The Japanese investment giant had invested $2.5 billion in Flipkart through its $100-billion Vision Fund only last August.

7)Alongside Walmart, there’s some indication that technology giant Alphabet (parent of Google) will also invest in Flipkart.Google will reportedly invest $3 Bn in the Walmart-Flipkart deal and will receive 15% of the total acquired stake in Flipkart.

It is very surprising to see the acquisition of a leading company like Flipkart just gifted into the hands of Walmart inc.I can surely not comment on the exact motives of the respective companies in going ahead with such deals. However , the consequences, after effects and predictions  are wide open for the world to observe and understand. This deal is going to have a severe impact on the entire industry in all aspects . The key takeaways from the staggering deal would be as follows:- 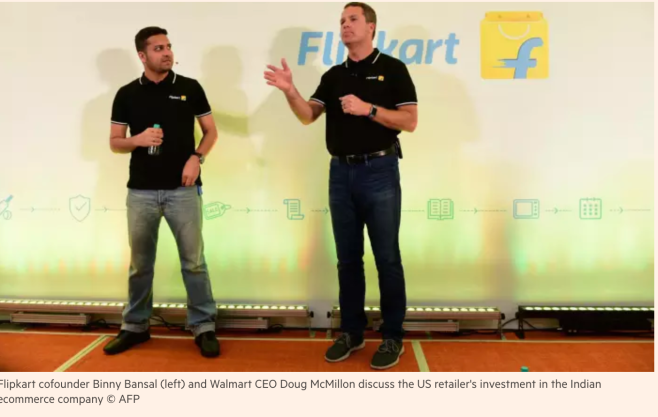 Flipkart has benefitted tremendously from this deal  in terms of resources and infrastructure. Walmart is known for its low-cost development mechanism and this technology and resources added to Flipkart will increase its revenue, sales, profit margin to a great extent. There is much to worry about all the rival companies like amazon since competitive prices always prove to be the major basis for the point in selection of the online partner to make purchases with. This cost reduction ,competitive prices, added technology and infrastructure developments may just swipe the entire market at one go having seen a similar difference caused by reliance Jio inc in the technology sector.Walmart has had proven instances of excellence in supply chain management and conducting warehouse operations, thus benefitting Flipkart. 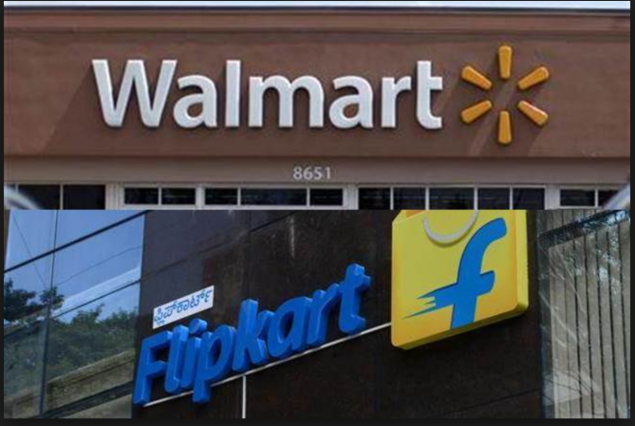 Often, it is noticed that when two companies go for a merger or an acquisition, it denotes power. Sometimes, it works on the name of the parent company. However, with Flipkart leading the market, Walmart has played it smartly by keeping the “flipkart” brand name different, distinct and clear from its identity. The Walmart inc gave a statement, addressing all the “flipkatters” of their intention of keeping Flipkart as a separate entity stating “we want to empower you and let you grow”. This, according to my analysis, will surely play an important factor in this race.

Having intense competition in an industry makes it difficult to match up with the biggies in terms of cost, selling price, cost of production, scale of operations and other platforms. These small businesses eventually get taken over by multinationals and leaders of the industry to cover market share as much as possible. The businesses do not get much reach due to the industry leaders and their large-scale publicity and promotional campaigns often land up getting crushed. For small business to bloom, there has to be scope of growth and limited saturation in the industry. The inclusion of this deal will lead to intense competition making the industry saturated in no time.

4)Killing the middlemen and the brokerage market:-

Often alongside online and retail companies works the middleman and brokerage market that earn and run business based on differences in pricing. With the intense competition looming up and competitive pricing becoming the new focus for market leaders, the future of the middleman market seems very dark. According to my predictions, this market will deem to be non-existing in’ the next 5 upcoming years.

5)Tarnishing the “homely” reputation of “ being Indian”:-

Any company that makes it big in its home country is considered homely and preferred over its competitors.This is because of its understanding of the crowd it is dealing with and the sentiments it is upholding while carrying on business. Flipkart ,growing in India and becoming a leader in no time, is a clear indication of this fact .With this deal moving forward in its final stages and with having a foreign company pulling on the reins of Flipkart ,the future remains unpredictable based  on the fact that Walmart via Flipkart may not be able to connect to the audience.It is a minor fact but may become challenging indirectly in no time. 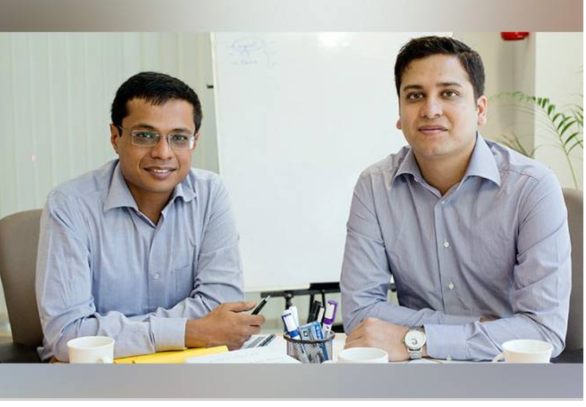 The mother always knows every trait and behaviour of its own baby. It knows how to improve him and nurture him perfectly because she has been deeply attached to him and knows every minute detail about the baby. We often give in our 100% in improving and growing something that is ours. Today, with one of the co-founders exiting the company, the future remains unanswered. It is very difficult to replace the position of such an individual who has given his life to the company. It will be interesting to observe how the expertise of these global companies handle such a situation.

In the preceding years, Flipkart was facing investment crunches and dark days on many occasions. Companies like Softbank, Tiger global and many others invested funds in Flipkart with a vision to progress in the Indian market. With Walmart purchasing majority stake in the company, all the “emergency friends” have withdrawn their stakes from the company. Abandoning your friends of last resort is a daring move by the company.

Walmart has a lot to prove from its new investment in Flipkart since it has sold its investment in UK to seal this deal. It recently sold off its UK merchandiser ASDA to Sainsbury for $10 Bn, which accorded it better negotiation powers in the face of Amazon’s rival offer to Flipkart. Having withdrawn funds from a huge investment ,Walmart has a lot at stake to convert it into a profitable venture.

This proves to be a big worry for every growing company and start-up which is trying to expand in India. Competition has made foreign companies take-over every growing company in India to stay ahead of its rivals. Every multi national has made it their motto to take over companies under their banner as a display of strength and growth. This worry might just kill every entrepreneurs’ hopes and aspirations.

This deal has already broken many records and take the level of competition to another level . The rest is left over to Walmart to prove with what it does with its new 15 billion dollar purchase. Will it transform Flipkart into a world dominating company or a loss making investment. What do you think?

BUT DO NOT FORGET TO-

“Keep peace with the financial situation “

As a child , I was always exposed to stock markets and share index numbers along with financial jargons . This got me pretty fascinated with this world. I realized the importance of finance and developed a great interest in it. This got me to pursue commerce as my core subject along with economics and accounting in high school. I took this journey forward by pursuing the Bachelors degree in Accounting and finance at H.R.College Of commerce and economics. This never-ending thirst for knowledge in finance got me to pursue courses in derivatives and financial markets at the Bombay stock exchange. I have attended two summer schools-Kings college London and University of Berkeley in subjects like Consumer Behavior , Leadership and management. The main aim for the summer exposure was to add to my overall growth and personality development. I have been a proud co-founder/Vice-President of club at H.R.College I strongly believe in giving back to our society as well, due to which I am a part of Honors Course over all the three years. The main motto of my career is to revolutionize the finance sector, one step at a time. View all posts by sharesinthecity